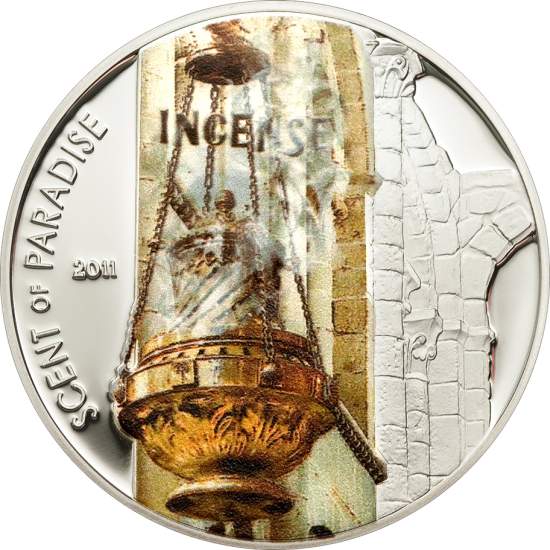 Silver coin issued Palau, while rubbing the coloured coin surface the incense scent rises to your nose.
The coin obverse depicts a golden censer while the incense is being burned inside.

Incense is the most common of sacred scents used in organized religions. Lots of witches like it too, especially those with some Eastern training (Buddhism, etc). You can get incense in cones, sticks, or powder forms.
Because many incenses are made with chemical fragrances and fillers rather than natural sources, they can be problematic or even dangerous for many witches. Even the natural kind can cause problems for some people.
Incense plays an important part in the Catholic Mass, and is used by many other denominations as well. During Mass incense is used to venerate the altar, the Book of the Gospels, the bread and wine, and the assembled congregation. It is also used during funerals to venerate the body of the deceased. Traditionally, five grains of liturgical incense are placed in the paschal candle at the Easter Vigil, as a symbol of the five wounds Christ received at the Crucifixion. The use of church incense is rich in symbolic meaning. The purifying fragrance of the church incense represents virtue. The rising smoke represents the prayers of the congregation rising towards God.