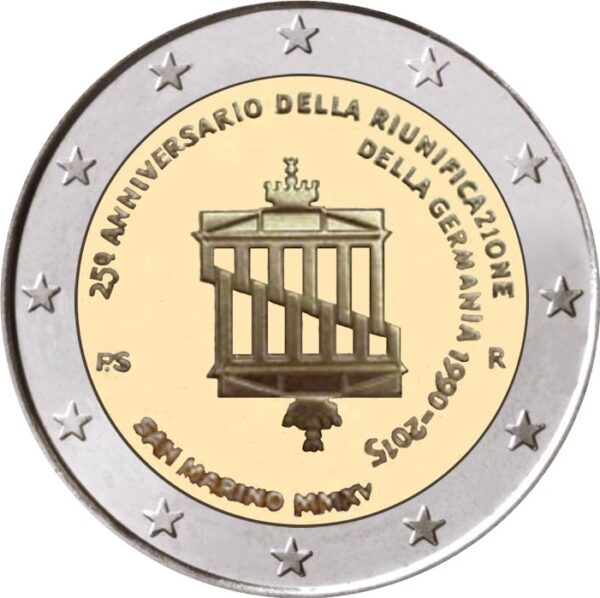 Description: The coin depicts the Brandenburg Gate in the foreground, the most famous monument of East Berlin during the Cold War. The two designs of the gate are embedded like two hands, a symbol of the reunification of two peoples.
The German reunification was the process in 1990 in which the German Democratic Republic (GDR/East Germany) joined the Federal Republic of Germany (FRG/West Germany) to form the reunited nation of Germany, and when Berlin reunited into a single city, as provided by its then Grundgesetz constitution Article 23. The end of the unification process is officially referred to as German unity (German: Deutsche Einheit), celebrated on 3 October.

The East German regime started to falter in May 1989, when the removal of Hungary’s border fence opened a hole in the Iron Curtain. It caused an exodus of thousands of East Germans fleeing to West Germany and Austria via Hungary. The Peaceful Revolution, a series of protests by East Germans, led to the GDR’s first free elections on 18 March 1990, and to the negotiations between the GDR and FRG that culminated in a Unification Treaty.